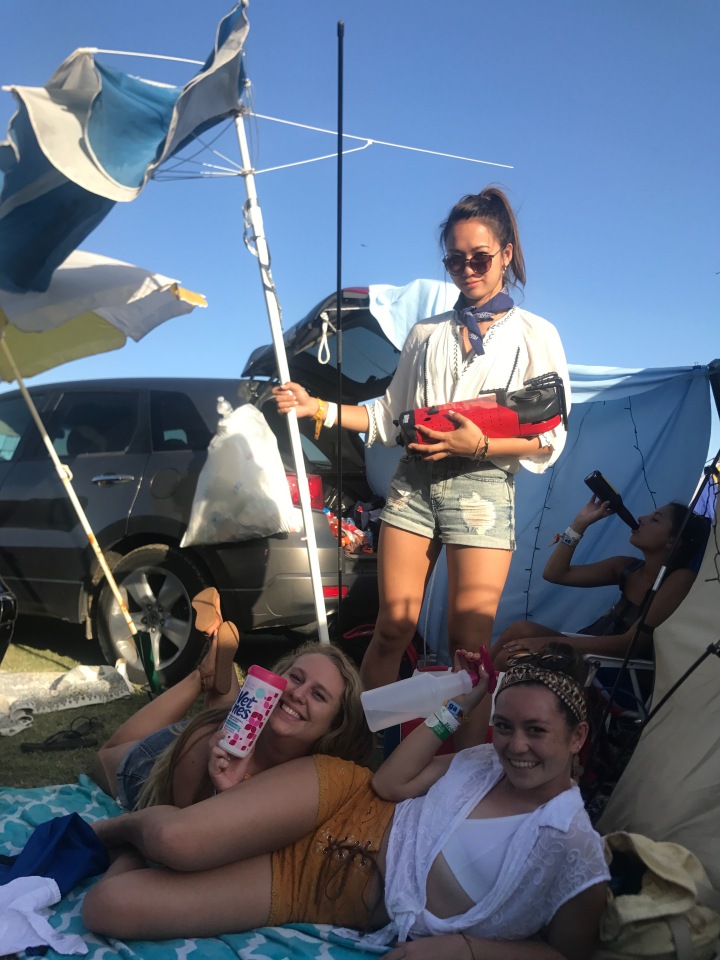 Let me just start off by saying, if you were a fan of my first Coachella disaster, then you are most likely going to be a fan of this one. So, it is a year later in the world famous Coachella Valley and you would think we would be professionals at this by now. At this point, this is our third time at this festival and nothing has changed. We are still about to make even dumber decisions, except we just don’t know it yet!

It’s 8am, we are loading the rest of our snacks into the car on top of the mounds of pillows and blankets that are smashed in the trunk. Why all the pillows and blankets? You ask. Oh because this year we are trying something new! We are going to save money on a hotel and car camp instead! Luxury right?? I would be lying if I said I wasn’t actually really excited. The thought of being able to walk from the stage to your tent and falling right asleep seemed ideal. It also seemed like it would be amazing to be able to wake up to the sound of music on the grounds. I would also be lying if I said I wasn’t extremely, extremely wrong in these fantasies.

So there we are, driving early because a couple of our friends have to go pick up their tickets at Will Call. Already, we are experiencing some red flags that we obviously choose to ignore. There was a mishap with the tickets at Will Call and someone had stolen our friend’s tickets. Of course right? Our friends come back after probably 40-ish minutes, just looking so extremely stressed out. However, we all are hyping each other up saying it’s going to be smooth sailing from here on out. Again, so wrong.

As we pull into a spot, I for one am shocked at how little space there is between cars. No joke, if you opened the car door too wide you would probably slam into the next person’s car. Instantly, I realize we are going to have to become really good acquaintances with our neighbors. Our neighbors to the right were: a couple who just wouldn’t stop fighting (the guy slept on the ground out of the tent the majority of the weekend), and some 30 year olds who brought huge speakers to blast their horrible music. This is my first time ever sleeping in a tent outdoors and I am already rattled.

Once our living quarters are set up, we decide it is time to stomp the grounds. Immediately upon entering, we find a lost purse, that we will later realize is CURSED. Summer picks it up and decides to carry it around, until it is convenient to return it to lost and found. The day seems to breeze by with no complications (suspicious, right?). Suddenly, it is night, aka time to consume some illegal substances. Instantly, and I mean INSTANTLY, things go wrong. By now, you are probably wondering why the hell I keep going to Coachella. It can never be a smooth sailing experience like the Instagram models have. Our friend becomes super sick and sprints away from the group, and shortly after, our other friend loses his phone. Fantastic. Keep in mind, at this point, we are just assuming it is bad luck, and not the purse.

Deciding the day has been way too long, myself and a couple friends (including the one who lost his phone), figure it is best to head back to the campsite and just chill. We even go to the lost and found to see if the phone has miraculously turned up. Of course, it hasn’t. As the rest of the group slowly starts trickling back, we decide at the early hours of 1am, that it is time to go to bed. Oh, you thought we would just sleep that easily? Unfortunately our 30 year old neighbors decided to come back at 3AM and BLAST some horrible music that they probably made themselves on Garage Band. However, eventually our bodies become so accustomed to their noise, it’s almost like a soft breeze lulling us to sleep.

For some reason, my dreamy brain assumed that waking up ON the Coachella campgrounds was going to be majestic like in a movie. Yeah, no. As if being woken up by the sun at 7AM wasn’t bad enough, a MASSIVE moth is ricocheting off the walls of our tent. With it being gross and hot in the desert, my friend and I decide we want to go take a shower. So we make moves over to the “deluxe showers.” Now don’t be fooled, the deluxe part just means a porta potty with a showerhead. As we get closer, we realize there is no way we are going to even make it. The line is huge, meaning there will be no water left by the time it is our turn. So, we decide to walk back. Now, at this time, I have no idea that my friends back at the campsite are experiencing ACTUAL HELL. As we are walking, we see a bunch of police go by on horses, followed by fire department golf carts with their sirens blaring. We start to crack jokes about how it is only day two and people are already making mistakes. We find it even FUNNIER, that the cops are turning on to our “street.” Then, we round the corner. There, we see our whole squad circled around a charred tarp. When I say charred, I mean this tarp was blue and it is now pitch black.

After the cops leave, I find out, that someone tried to make ramen with our mini stove (pictured below and with the title), and it no joke blew up. Me being me, I start cracking up. I wasn’t there for the trauma, so I am having a blast videoing the cops and the mini stove in question. Once the police leave, we all decide it is time to get out of there and go enjoy some music. Our friend’s phone is still missing, we still have the unknown cursed purse, but we are FINALLY READY TO HAVE A GOOD TIME. Nothing bad happens for the rest of the day, probably because everyone is too exhausted to even move.

To make this long story short, at some point in the night on Day Two, my friend decides we need to return this purse because it has been too long. No joke, the second she returns it, suddenly our friend’s phone is at the lost and found. No more disasters happen, and everyone is in a good mood. Day 3 goes so smoothly. I, like every year, grow stronger on the last day. So, I am super upset to leave and return back to real life. That night, I realized that Coachella also did not want me to leave. We packed up the entirety of the campsite, only to have the guards tell us that we were not allowed to start lining up to leave until 2am. At this point, it is probably midnight. So, we all pull out blankets and take naps on the ground. Just like they did when the dinosaurs were around.

Now, I know this story was way more complex and probably made no sense to anyone who wasn’t there. However, I think it is going to fit well in the theme of festival disasters, as I am SURE there will be more in the years to come. If you like these stories though, definitely let me know, as always there is more where these came from!

2 thoughts on “Burnin’ Up In Indio”